A village created in 1781 by the Spaniards, now a mega county of over 10 million people.

Historically home to the Chumash and Tongva, Los Angeles was claimed by Juan Rodríguez Cabrillo for Spain in 1542 along with the rest of what would become Alta California. The city was officially founded on September 4, 1781, by Spanish governor Felipe de Neve. It became a part of Mexico in 1821 following the Mexican War of Independence. In 1848, at the end of the Mexican–American War, Los Angeles and the rest of California were purchased as part of the Treaty of Guadalupe Hidalgo, thereby becoming part of the United States. Los Angeles was incorporated as a municipality on April 4, 1850, five months before California achieved statehood.

Los Angeles is both flat and hilly. The highest point in the city is 5,074 ft (1,547 m) Mount Lukens, located at the northeastern end of the San Fernando Valley. The eastern end of the Santa Monica Mountains stretches from Downtown to the Pacific Ocean and separates the Los Angeles Basin from the San Fernando Valley. Other hilly parts of Los Angeles include the Mt. Washington area north of Downtown, eastern parts such as Boyle Heights, the Crenshaw district around the Baldwin Hills, and the San Pedro district.

Los Angeles Motorcycle tours, get ready for a unique kind of motorcycle vacations! 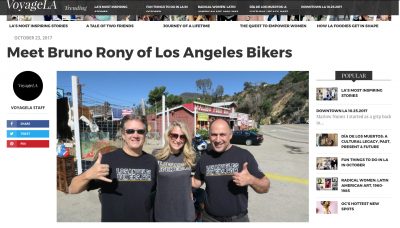